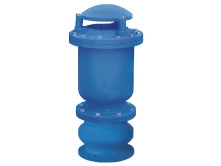 ●  SURGE VALVE is installed in the air valve’s inlet, when the pump starts or the pipeline is filled to

full nearly, it can reduce the slam of flow, which would can prevent the damage of the parts of

●  When the pipeline is filled to the full nearly, the flow go into the branch of pipe of the air valve, the

surge valve would close its plug, which still allow the little flow to pass through orifice of plug, so

the air valve would close smoothly to prevent spout.